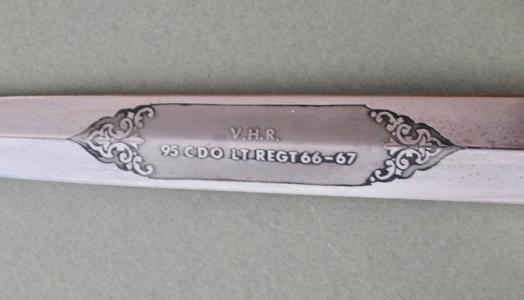 This page is for general discussion, notes on fakes, items of interest and other areas of interest to Military and Antique knives.

​The new Offensive Weapons Act is still causing a lot of confusion amongst some, especially certain dealers and auction houses who have jumped the gun in claiming they cannot send knives.  This is totally wrong and not what the Act says.   In addition the Act is not yet law and will only become so when a Commencement Order is issued.    The Home Office's own website published this note on the 16th May 2019 which makes the situation clear.

The Act includes a number of other measures to tackle serious violence, including:

The government will also consult on guidance for some of the new measures in the Act and engage with businesses and industry on how the legislation will affect them before it comes into force.

You will be able to send to a residential address subject to proper procedures for checking the person is over 18, and as indicated the legislation is not yet in force.

The Home Office has published on their website a new document for consultation.  It is  draft statutory guidance on the Offensive Weapons Act.   The postage aspects are confusing but not as bad as they first seem.

I and a friend and fellow collector have been hoping for a meeting with the Home Office to discuss some aspects of the law in particular the impact of the historic importance defence ( I will post more on this later) but with the current virus issue the meeting has not yet been arranged and probably will not happen for sometime.

Regarding the above we have been promised a meeting but we are pushing for this to  happen soon as details of the Compensation arrangements have been issued by the Home Office (its on their website) and this raises a number of new issues e.g. the compensation scheme will only run for 3 months and there is to be a standard level of values!

The latest news regarding postage is that despite the Act not yet being brought into force both Parcelfroce and Royal Mail have introduced age verification procedures.  They have written these up on their individual website but it is very much aimed at business customers, it is not clear what their positions are in respect of ordinary customers.

The compensation Bill associated with the Act is passing through the Parliamentary process.    Items of note is that you will only have 3 months in which to claim and that no compensation will be paid for items under £30.   There are  some issues with this Bill regarding legal ownership for example that you legal acquired the items before 1959 in the case of flick and gravity knives or before 1988 in the case of items in Section 141 of the 1988 Act.    This I would suggest in most case is impossible to prove.

AUCTION HOUSES - Some less than honest.

Several years ago I bought from a  dealer a set of rare shoulder titles.  These turned out to be fake and I got my money back with no issues.   Turn clock forward to today and this same dealer who has associations with a auction has for sale in the auction a small batch of insignia which includes what are the same set of titles.  If genuine these would be worth many hundreds of pounds yet the estimate is around £30.   From his expertise he knows what a real set is worth but the lot contains no comment about them being reproductions/fakes or even any mention of the titles  Why not ?

In another auction house, one whose home page boast "our expert staff" has for sale a large amount of what is claimed ot be SOE/MI9 items.   There is supposed to be provenance to a deceased collector and yes it is possible that it did come from one collection, but the 99% of the items are fake.   So why do their expert staff not know this!

Some auction houses do not seem to care they are selling fakes which are catalogued as being genuine relying on less knowledgable buyers to pay good money, and thus earn good commission, for the items without any repercussions on the auction house.   BUYER BEWARE

Post WW2 etched Wilkinson presentation knives are not that common but this one was a nice find as it is etched to an unusual unit i.e. 95 Commando Royal Artillery.   They acted as forward gun controllers/observers.    Work is on going to identify VHR though I have a provisional ID that needs confirmation.  Also unusual in that it has a "Tom Beasley Stalingrad Sword knife" type sheath.